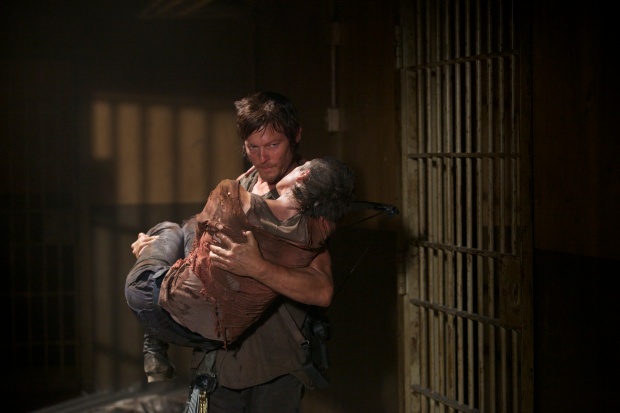 Poor Rick has lost his mind and is having a phone conversation with the many compartments of his conscience.  I wasn’tsure what the phone ringing meant last episode but I guess it was his sanity calling.  He is just so sad now; it is heart breaking to watch him.  Cute little baby girl, who wants to bet they’ll name her Lori?  Little peanut.  On a happy note: Carol is alive!  Yay!  I hope her and Darryl have a moment to share their feelings soon.  Out of all the romances, I think theirs is the most adorable.  He was so mad when he thought a walker had killed her but there she was half dead in a closet.  He carried her back to safety like a redneck in shining armor.  On a less happy note: Uh oh, the creepy Governor is spreading his seed all over Andrea…ew.

Merle is at his terrible best in this episode as he hunts Michonne unsuccessfully at the command of the Governor.  I love Michonne’s kickass nature; she managed to ambush four men with guns and killed half of them.  She even kicked Merle in the nuts and busted his nose – yeah girl!  She got a bunch of walker guts all over her while trying to get away from Merle and figured out that her dead stench keeps other walkers from recognizing her.  We found out the hard way that Woodbury and the prison are not far from each other when Merle and Michonne happen upon Maggie and Glenn making a food and supply run in a nearby town.  Merle claims to be friendly then quickly turns on Glenn when he finds out Darryl is alive.  He takes Glenn and Maggie hostage and back to Woodbury while Michonne sees it all go down from her hiding place.  Being the smart woman that she is, Michonne makes her way to the prison with baby formula (left behind by Glenn) to rally the troops.  I can’t wait to see what happens when the Rickinator meet the Governor.  ::dun dun dun::