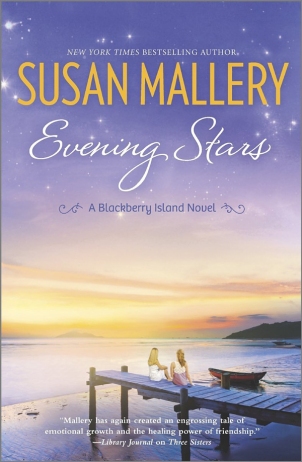 Are you a fan of Susan Mallery’s Blackberry Island series? Or maybe you’re just looking for a poignant, relatable story. Either way, the third book in the series, Evening Stars, should be on your to-read list. After I share my thoughts on the book, stay tuned for an Evening Stars giveaway!

Evening Stars was something of a departure for me in terms of my usual reading material. I usually stick pretty closely to YA, and reading about adults with, well, adult concerns, took a little getting used to. But it wasn’t too hard – Evening Stars has a homey, comfortable feel about. Even though I hadn’t read the previous books in the series and was totally new to Mallery’s writing, there was a certain sense of familiarity about the story. It’s both excruciatingly relatable and optimistically idealistic, which I think is probably a winning combination for its target audience. You can simultaneously relate to the characters’ frustrations and obstacles while gaining the wish fulfillment experience of seeing them endure the therapeutic life lessons we probably all need.

Evening Stars tells the story of two sisters. The older sister, Nina, has never really left Blackberry Island. Between cleaning up after her irresponsible mother and dealing with the fallout from the end of a serious relationship, Nina put herself in a bit of a rut. She settled for a career as a nurse instead of pursuing her dreams to become a doctor, she hasn’t had a serious relationship in years, and she still lives with her mother. When Nina’s old flame returns to Blackberry Island as a successful doctor, she begins to see her life from a new, somewhat depressing perspective.

Nina’s younger sister Averil received many opportunities Nina did not – college in southern California, the chance to pursue a dream job in journalism, and a doting husband whose love she never questioned. But despite seemingly having it all, Averil isn’t happy, and she can’t quite figure out why. After a particularly difficult argument with her husband regarding her hesitance to have children, Averil decides some time off and a visit to Blackberry Island are in order.

Both sisters are on something of a quest, but neither of them quite realize what they will learn about themselves in the process. While there are some romantic storylines in Evening Stars, the story is really about family and relationships and finding peace with yourself. Nina and Averil have a complicated relationship with each other and with their mother, and how they relate to each other has shaped the sort of people they became, for better or for worse. Evening Stars shows what happens when those relationships are challenged and reshaped, and just how empowering that can be.

Something I simultaneously loved and dreaded about Evening Stars was its realism in terms of the complexities and disappointments that accompany adulthood. Certainly many people can relate to Nina – having hopes and dreams for yourself but being restricted by the realities and responsibilities of your life. And I’m sure others will empathize with Averil’s difficulties finding happiness despite her seemingly put-together life. I absolutely appreciate Mallery’s willingness to subject her characters to these challenges and not give them the easy way out. At the same time, some of her characters’ realizations are almost painfully realistic. I don’t mean that this is necessarily a bad thing – it adds to the emotional impact and poignancy of the story – but if you’re reading to escape these sorts of things, or looking for a light and fun read, Evening Stars is probably not the place to look.

On the other side of the coin, having that sense of realism really makes the characters come alive. This is especially true of Nina and Averil, but it bleeds over into more minor characters as well. And there are some bits of whimsy that lighten the overall mood of the book, from the homey small island setting to a handful of colorful, though not excessively so, side characters. Evening Stars felt to me like the book equivalent of a thoughtful chick flick – it clearly has its audience in mind, and it has certain markers along the way that help it fit that niche – but it’s also very reflective. It plays to the crowd but avoids feeling too slick or superficial.

I kind of hate the phrase “chick lit,” but you can’t deny that saying it provides a pretty accurate picture for what sort of book you might be getting into. Evening Stars is about women, but it’s not what I would call chick lit – and I think in this case that’s a good thing. If you enjoy contemporary female-centric stories but prefer them with emotion and integrity as opposed to the trademark sass and sarcasm of many chick lit titles (or maybe just want to try out something a little different for a change), I’d definitely recommend checking out Evening Stars, and Susan Mallery’s entire Blackberry Island series.

One lucky giveaway winner will receive:

A Paperback Copy of Evening Stars

Enter the Evening Stars Giveaway via the official entry form below!

This giveaway is now closed.

One winner will be chosen March 5th and will be contacted via email for confirmation and shipping instruction. Prizing courtesy of Harlequin MIRA. Giveaway open to U.S. addresses only.